My Heart was Racing 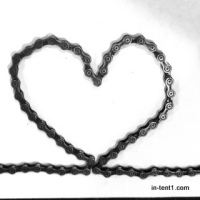 The USA Triathlon Olympic-Distance National Championships was this past weekend. My age group wave entered the water at (or about) 8:21. Last winter, with snow frozen to my eyebrows, I wouldn’t have imagined being a DNS.

Saturday morning, I rolled on to the road, earlier than my wave took off, but later than a usual Saturday ride. I wore my full race kit.

My disappointment of not going to Wisconsin had faded. But I wasn’t quite ready to rally around the thought of “next year.  I just wanted to ride my bike and run in the streets, like I had trained to do on this day, somewhere else.

As soon as I finished the warm-up, I let go. No plans, no goals, no target pace (no power meter). Traffic was light and roads were clean – I swear I had a tailwind for the entire 26 mile loop. I rode by feel.  I had palpable moments where I felt like my 9 year old self screaming down the huge hill on our street on my awesome huffy. (yes, banana seat & monkey bars)

At some point the thought crossed my mind that I was doing exactly what I needed to do in honor of the event. I thought about the hundreds and hundreds of athletes who would be there – racing their hearts out.  I felt so impressed by the thought of them, and I felt connected to the journey, even though I was 1,000 miles east of where I’d hoped to be.

My heart felt happy – filled with the spirit of triathlon and age group competition. I love this sport. Since deciding not to go to WI, I’ve sometimes felt like all the hours and training might have been wasted. But flying along in the aerobars – free of fear and enjoying the ride – I could see how far I’d come and knew it wasn’t a waste. I was having a blast – and for me, this is the point of all of my triathlon stuff.

My leg were tired when I hopped off the bike, but I was determined to hit the first mile of the run at my dream race pace. I kept the Nationals’ athletes in my thoughts – my heart was racing with them.

This site uses Akismet to reduce spam. Learn how your comment data is processed.